The store will not work correctly in the case when cookies are disabled.
In stock
SKU
571527930

The Pirates Of Penzance (Vocal Score)

€21.25
Piano, Voice Vocal Scores
Add to Wish List Add to Compare
Email
Be the first to review this product
Skip to the end of the images gallery 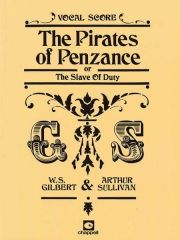 Skip to the beginning of the images gallery
Details
The Pirates of Penzance, or The Slave of Duty, is a comic opera in two acts. One of the Savoy Operas, the official premiere was at the Fifth Avenue Theatre in New York on December 31, 1879, where it was a hit with audiences and critics. The London premiere was on April 3, 1880, at the Opera Comique, where it ran for 363 performances, having already been playing successfully for over three months in New York. Pirates remains popular today, taking its place along with The Mikado and H.M.S. Pinafore as one of the most frequently played Gilbert and Sullivan operas. Its successful 1981 Broadway revival by Joseph Papp refreshed its popularity.
Pour, Oh Pour, The Pirate Sherry; When Fred闂傚倷鑳堕崑銊╁磿閺屻儲鍋榗 Was A Little Lad; Oh, Better Far To Live And Die; Oh! False One, You Have Deceived Me; Climbing Over Rocky Mountain; Stop, Ladies, Pray!; Oh! Is There Not One Maiden Breast; Poor Wand闂傚倷鑳堕崑銊╁磿閺屻儲鍋榥g One; What Ought We To Do?; How Beautfully Blue The Sky; Stay, We Must Not Lose Our Senses; Hold, Monsters!; I Am The Very Pattern of a Modern Major-General; Oh! Men Of Dark And Dismal Fate.
More Information
Reviews
Write Your Own Review
To Top